One cant understand the Palestinian-zionist conflict without bringing the whole geopolitical context that happened for half a century (and even beyond that) before the actual ethnic cleansing of Palestine:

First, Palestine was inhabited by the native Palestinians (regardless of their religion) for Thousands of years before the zionist thought to build their “jewish state” in Palestine.

In the late 19th century, and due to the European persecution of the European jews, the European zionist “jews” started a European national political movement (The Arab jews were absent) calling for finding a separate homeland for the Jews. They were given numerous proposals by the European governments, Argentina in South America, Uganda in Africa, and Palestine in the Arab world.

For Herzl, that was a sober, rational idea. No God involved, no holy scriptures, no romantic nonsense. Palestine did not enter his mind. Nor had he any interest in the religious fantasies of Christian Zionists in Britain and the US, like Alfred Balfour.

Now, because that the jewish religion has ancient ties to Palestine they chose Palestine as a “homeland” to be established for the jews,

The jews, just like any other nation that invaded Palestine, have never ever been the natives of Palestine but invaders:

1. Before the old jewish invasion of Palestine, the area was inhabited for thousands of years by the native Canaanites, Jebusites, plesheth in the south, and the Phoneticians in the north that BEFORE any jew imagined to create a “god” to promise him Palestine.

2. The old jews were OUTside Palestine, a bunch of nomads roaming the Middle East, until they created their own “god” and made Him promise them a land that originally is not theirs.

3. The old jews occupied and ruled parts of (but never all of) Palestine for only 77 years and they toppled the original Jebusite temple and built theirs on its rubble, before they were driven out by the Roman invaders.

4. The old jews were invaders and simply were kicked out very soon compared to the Muslim occupiers of Spain who occupied Spain for over 600 years… So, the Muslims have zero right in Spain just the same like both the old and modern jews had and have zero right in Palestine… unless you want to believe in their Talmudic heresies of the “promised land” which anybody can claim a land property anywhere lying at his invented “god”. 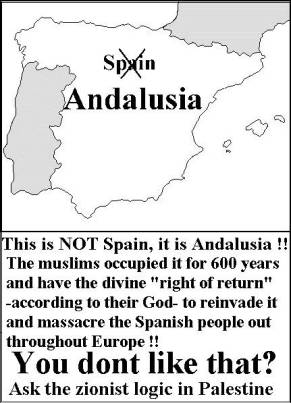 After the European zionist jews decided to colonize Palestine in the modern time aided and encouraged by the European colonization powers who (just like God in the old ages) promised them Palestine by the British “God” Arthur Balfour.

soon after modern European jews had decided to colonize Palestine in their First conference held Basle, Switzerland (1899), they created the Jewish National Fund (JNF) in order to start buying land properties in Palestine to pave the way for establishing the “jewish state”, But this project didn’t work well for them (dispite the huge capital the JNF collected worldwide for that purpose) as the Palestinians not only didn’t sell their land but fought against that policy., and in 1947 (and despite the British facilitation of the jewish activities in Palestine) the JNF didn’t buy but less than 5.8% from Palestine (a place less than Te-Aviv city now.

Seeing that their (buy and sell) project wouldn’t work, The zionist colonizers needed and did an extreme violent path that can be summarized in two things as Ilan Pappe illustrates: 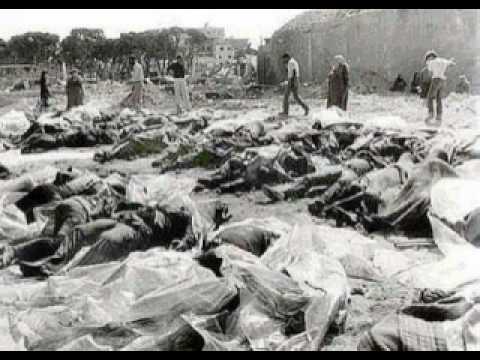 1. A detailed information about the local Palestinian inhabitants which (the JNF was asked to compile)

…. the JNF Arab village a inventory that was a blueprint completed by the late 1930s that included the topographic location of each village with detailed information including husbandry, cultivated land, number of trees, quality of fruit, average amount of land per family, number of cars, shop owners, Palestinian clans and their political affiliation, descriptions of village mosques and names of their imams, civil servants and more. The final inventory update was finished in 1947 with lists of “wanted” persons in each village targeted in 1948 for search-and-arrest operations with those seized summarily shot on the spot in cold blood.

2. to create several terrorist gang groups like Lehi, Irgun and Stern which started operating as early as 1920s by assassinating the Palestinians that posed an obstacle to the zionist colonization project.

Now, having done so .. the zionist needed a systematic plan for the actual ethnic cleansing which started way before 1948:

President Franklin D. Roosevelt (enough time before the actual cleansing of Palestine) put it in December 1942 , “I actually would put a barbed wire around Palestine, and I would begin to move the Arabs out of Palestine…. Each time we move out an Arab we would bring in another Jewish family…” And this was exactly what happened with planned massacres !!

The plan was set:

“Red House” in Tel-Aviv that became headquarters for the Hagana, the dominant Zionist underground paramilitary militia during the British Mandate period in Palestine between 1920 and 1948 when the Jewish state came into being. He details how David Ben-Gurion, Israel’s first prime minister, met with leading Zionists and young Jewish military officers on March 10, 1948 to finalize plans to ethnically cleanse Palestine that unfolded in the months that followed including “large-scale (deadly serious)intimidation; laying siege to and bombarding villages and population centres; setting fire to homes, properties and goods; expulsion; demolition; and finally, planting mines among the rubble to prevent any of the expelled inhabitants from returning.”

During the ethnic cleansing of the native Palestinians some 70 documented massacres ( Israeli Massacres on Palestinians ) were perpetrated by the Zionist terrorist groups in a systematic way to terrorize the natives out of their homes and villages:

Once the ethnic cleansing begun, the whole ugly business took six months to complete. It expelled about 800,000 people, killed many others, and destroyed 531 villages and 11 urban neighborhoods in cities like Tel-Aviv, Haifa and Jerusalem. The action was a clear case of ethnic cleansing that international law today calls a crime against humanity for which convicted Nazis at Nuremberg were hanged. So far Israelis have always remained immune from international law even though names of guilty leaders and those charged with implementing their orders are known as well as the crimes they committed. 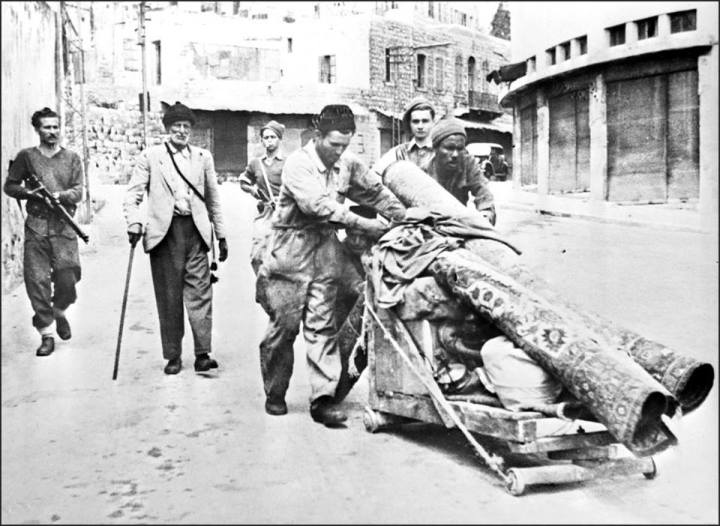 It should be noticed that:

1. Ethnically cleansing Palestine and creating “israel” is a European colonization project that was done by European jews. There has never been hatred or enmity between the Arabs-Muslims and the jews over history and it should be noticed that the jews had their ONLY jewish Golden Age under the Muslim rule and run out of Spain along with the Arabs fearing the European pogrom. In addition, in the modern history, while the jews were persecuted and massacred throughout Europe, they had a safe haven among the Arabs and in the Muslim countries.

2. The Arabs and Muslims didn’t kick the jews out of their homes from the Arab countries but it was the European zionist jews who had done the dirty job and MOST of the jews in the Arab-Muslim countries didnt migrate willingly to occupy Palestine but AFTER the creation of the zionist “jewish state” …. I would cite here exactly what my jewish Iraqi brother wrote after discovering the criminal zionist techniques:

” I write this article for the same reason I wrote my book: to tell the American people, and especially American Jews, that Jews from Islamic lands did not emigrate willingly to Israel; that, to force them to leave, Jews killed Jews; and that, to buy time to confiscate ever more Arab lands, Jews on numerous occasions rejected genuine peace initiatives from their Arab neighbors. I write about what the first prime minister of Israel called “cruel Zionism.” I write about it because I was part of it.”

3. You should know the fact that the zionist settlers systematically and deliberately ethnically cleansed Palestine from its natives both Muslims and Christians as they expelled over 750,000 Palestinians among them over 100,000 Christians and razed 540 native villages among them over 80 ancient Christian villages along with their ancient churches that stood since Jesus, for the zionists to come and invent their “jewish state” 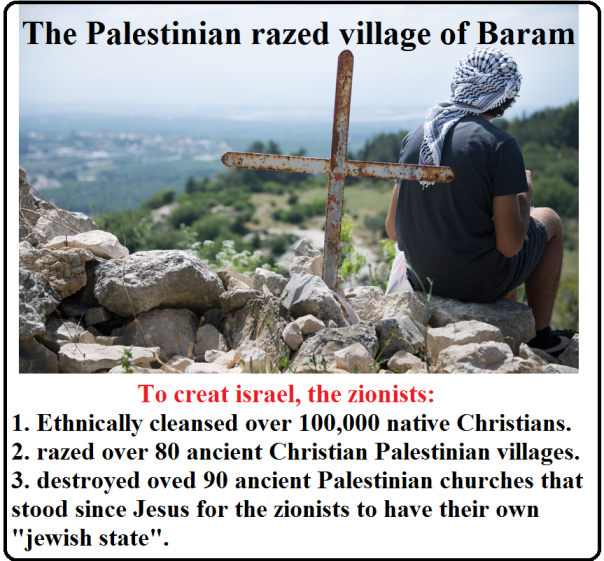 So … the whole fight is NOT between the “the Arabs-Muslims and the jews” as the zionist lie again, it is between European zionist occupiers (who ethnically cleansed the native Palestinians in the name of Judaism) and the natives of Palestine (both Muslims and Christians) who unjustifiably were massacred out of their homes and their villages were erased.

39 thoughts on “The Ethnic Cleansing of Palestine”

Sami, The bedouin is a Palestinian writer and blogger. He is originally ethnically cleansed from Ashdod/ Occupied Palestine, but living as a refugee in the West Bank/ Occupied Palestine. As an activist for Palestine, he has been arrested several times and spent some years in the zionist jails for resisting the zioniat occupation. He's been blogging exclusively about Palestine in different sites and in his blog @ www.samibedouin.wordpress.com View all posts by Sami, the bedouin.